The cup that makes everyone win 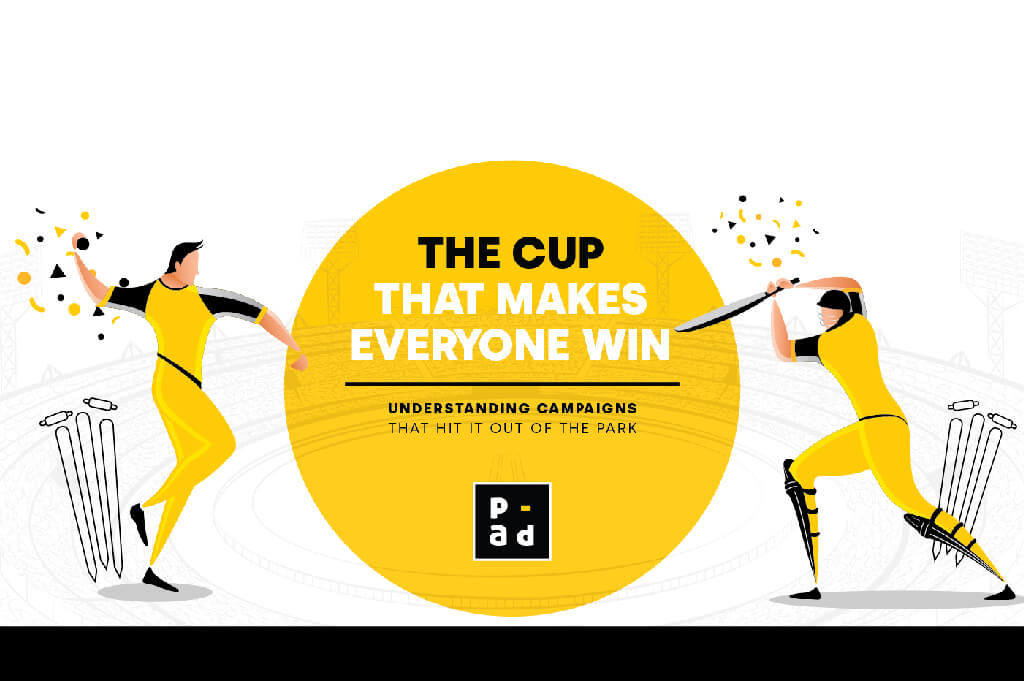 Bollywood, politics and cricket have and will continue to be one of the biggest advertising festivals and moments for brands, as they are aware that the attention of the masses is notably high, crafting a path for increased viewership and brand recall. In the first half of 2019, we witnessed some high contour events including General Elections, IPL and politically drifted entertainment that kept our josh skyrocketed.

But will things change, considering ad spends on IPL this year?

“Even though the World Cup is right on the heels of IPL, Indian audiences aren’t fatigued by cricket. The more, the merrier,” says Jigar Rambhia, national director – sports, Wavemaker India.

In a country that worships cricket, let’s take a tour to understand how are brands leveraging the biggest cultural integrator to score a Vegas Jackpot with their consumers.

Here are a few excellent World Cup campaigns executed by brands. Let us know which of these were your favourite or share with us the campaigns you have loved or drafted!

The World Cup. It’s the crown of cricket. This campaign highlights the nucleus of the sport and how every team is going to England to get their hands on the #CricketKaCrown. With more fan films in the line, Star Sports is thrilled to bring them alive and provide a spectacular viewing experience for fans across the country.

The first phase of activation saw auto drivers in multiple cities holding placards that read “Le Jayenge” and were encouraged to say “Le Jayenge” instead of “Nahi Jayenge”
Do you think Star Sports should have continued with the well-established and the earlier hymn of World Cup – “Mauka Mauka” or did you just catch yourself humming “Crown Cricket ka madam ji hum Le Jayenge”?

Uber says #WayO is the #WorldCupFanAnthem and so does ICC

Music connects us all. Now think of the same coupled with a powerful concoction of rage, passion and patriotism. Powerful, isn’t it? It wouldn’t be wrong to say that this is the era of anthems, with every Indian brand standing to cheer for our Men in Blue with an anthem of their own.

Uber India, on the other hand, along with popular youth icon Virat Kohli says it will take you to the World Cup. All you have to do is score runs by taking a few Uber Rides or ordering your favourite delicacies on Uber Eats, and you can go straight from cheering in front of your TV to cheering in the stadium in England.

Yet another anthem sporting Indian Captain and PUMA Ambassador, Virat Kohli, along with Divine, the country’s biggest hip-hop star. Divine and Virat together, in a manner, make this campaign widely relatable as it is bold, cheerful and inspiring. Puma has immortalised the blabbering gesture, synonymous with Virat’s “I’ll let my bat do the talking” gesture. This campaign also introduces them to the ‘Sock Them’ socks. Puma India has also partnered with Dunzo for real-time delivery, to help users get their hands on one of the 150 pairs of the One8 Golden Spikes, worn by Virat Kohli.

Swiggy India urges users to stay indoors and not miss a moment during this World Cup Season.

To enhance their promise of quick food delivery, Swiggy India urges users to not miss a moment during this world cup by ordering online.