The Golkonda Group – 25 Years of Hospitality and Service 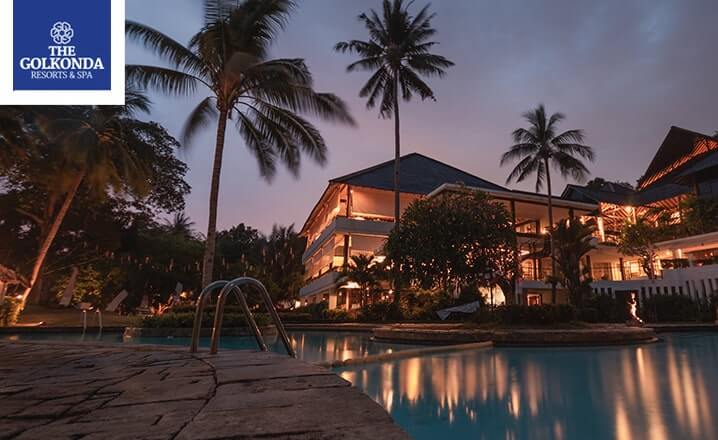 Hyderabad’s hospitality market was in major flux. Explosive growth in the middle class was joined by a huge surge in business and investments amongst the residents of Hyderabad. Foreign direct investment led to the growth of multinational conglomerates setting up base in the city. While ambitious international hotel brands were establishing themselves in the Deccan, The Golkonda Group, Hyderabad’s most celebrated hotel brand, realized it had an opportunity to serve new segments of the market.

Already established and successfully running, The Golkonda Hotel catered to Hyderabadis by recreating an authentic Nizami experience at the heart of the city. Positioned as the ‘sons of the soil,’ the Group owned the native hospitality space. 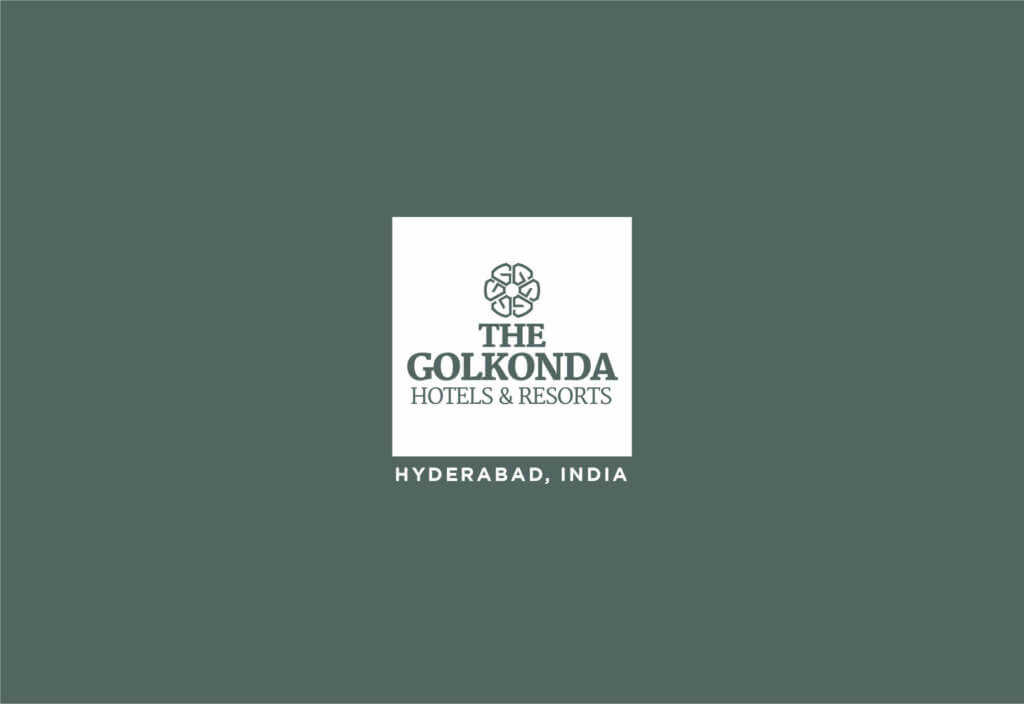 In 2012, The Golkonda Group embarked upon creating a niche experience for the affluent and well-travelled. Thus, The Golkonda Resorts & Spa was born. A luxury establishment on the outskirts of the city. They preserved the hotel’s storied past while providing fresh, new experiences that appeal to today’s guests.

Golkonda Resorts & Spa is home to the only monument in the world built for food, Jewel of Nizam – The Minar. We positioned the award-winning Nizami cuisine restaurant as Hyderabad’s Fifth Minar, a testament to the hospitable culture of the city, this 100-foot tall magnum opus adorns a jewel that houses the finest Hyderabadi Fine Dining restaurant in town. 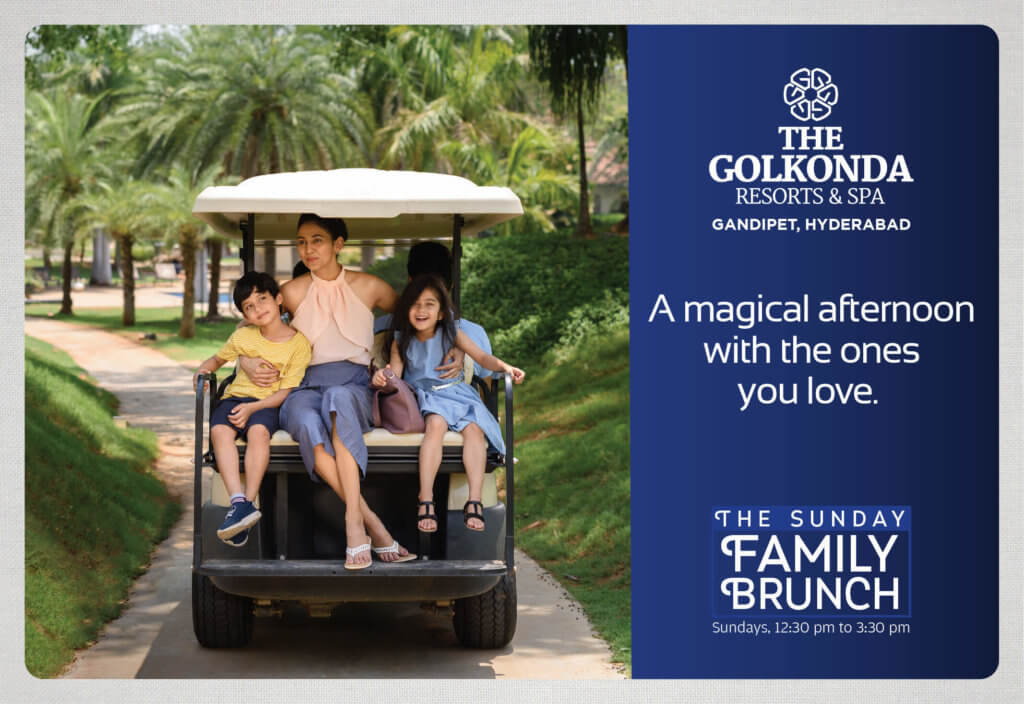 Our challenge was to update their branding and communication, so as to create brand appeal and increase footfall. How could Golkonda Hotel and Golkonda Resorts & Spa remain relevant, with multiple F&B properties popping up in the
city?

HOW WE APPROACHED IT 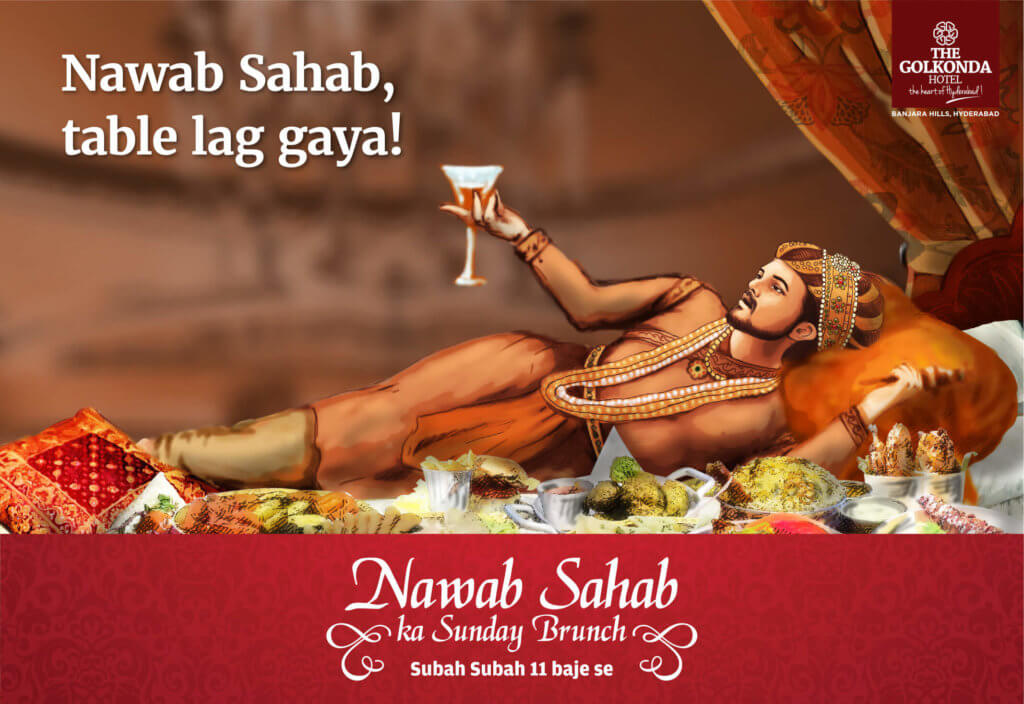 This was a brand which has been in market for decades now, and is widely celebrated in amongst a loyal set of audience. So, our prime focus was to find the right tone of communication and carve a place in the hearts of the audience.
We aimed to build a unique tone of voice that captures the attention of the target group and positioned The Golkonda Resorts & Spa as an escape just a few minutes from the city.
We created a voice that struck a chord in the hearts of the quintessential Hyderabadi, a voice that resonated the spirit of hospitality, the voice of Hyderabad. 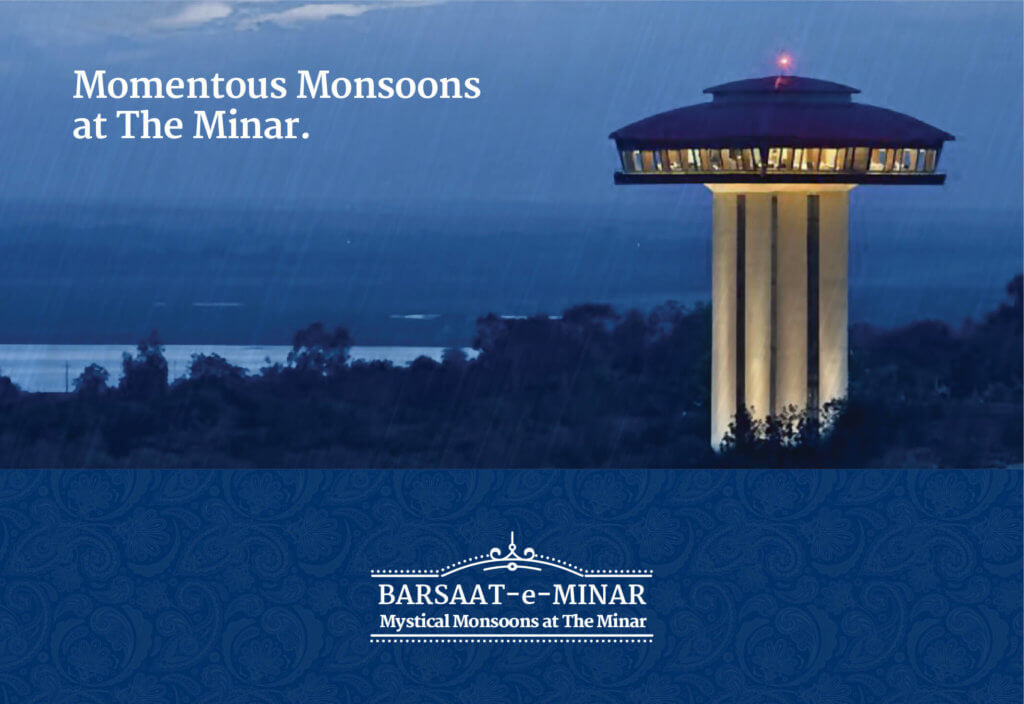 We identified target groups that the communication going forward would be directed towards.

Let’s take a detailed look at them below:

Families – The TG here are majorly divided into two; The nuclear families where the parents work and the kids are at school and larger family units where entire generations live under the same roof.
The communication for this category needed to highlight why The Golkonda Hotels and Resorts were the perfect choice for weekend getaways and meals with the family.

Couples – This group was easily identifiable: courting couples, married couples and even youngsters.
The communication for this group highlighted The Golkonda Resort’s Poolside Kitchen and positioned the restaurant as a romantic space for couples. The idea of dining under a blanket of stars with the one you love would appeal to them.

Corporates – With massive multinational companies springing up within the city, the corporate group was a large one. The idea of corporate lunches and retreats seemed like the perfect way to wriggle into this space to create a lasting impression that resulted in revenue and brand recall. Once an employee visited with their colleagues, the experience was bound to make them want to return.

The overall communication route we chose for the brand was compelling yet personal, using small nuances and incidents rom our daily life and using them as a something the audience would relate to. 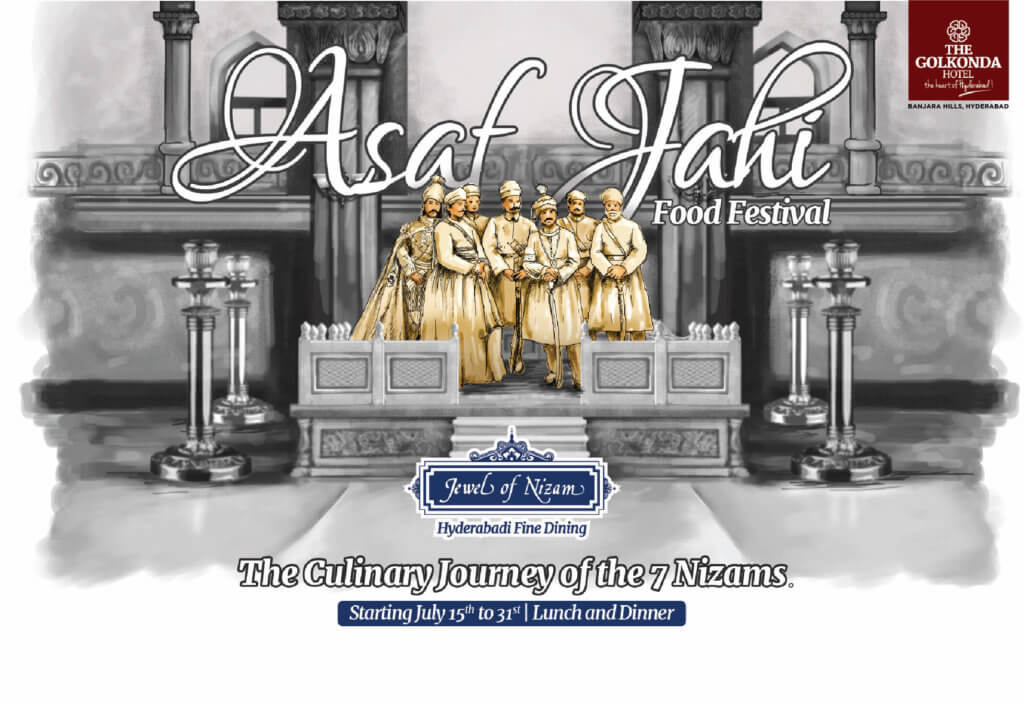 We understood the need for a niche space of luxury and relaxation, so we positioned the brand as luxury haven and an escape from the city.
All our communication was along the lines of a premium venue for getaways, dining and recreation. We built on the fact that the brand was a legacy upheld to this day which was truly Hyderabadi by nature. The tone of communication we chose to use was very personal, staying true to the whole luxury and experiential aspect of the brand.

We launched a campaign called ‘Intimate Weddings’ which targeted families and couples who were at a marriageable age or looking to get a family member married. The campaign revolved around the idea of an intimate affair that was memorable and bespoke. 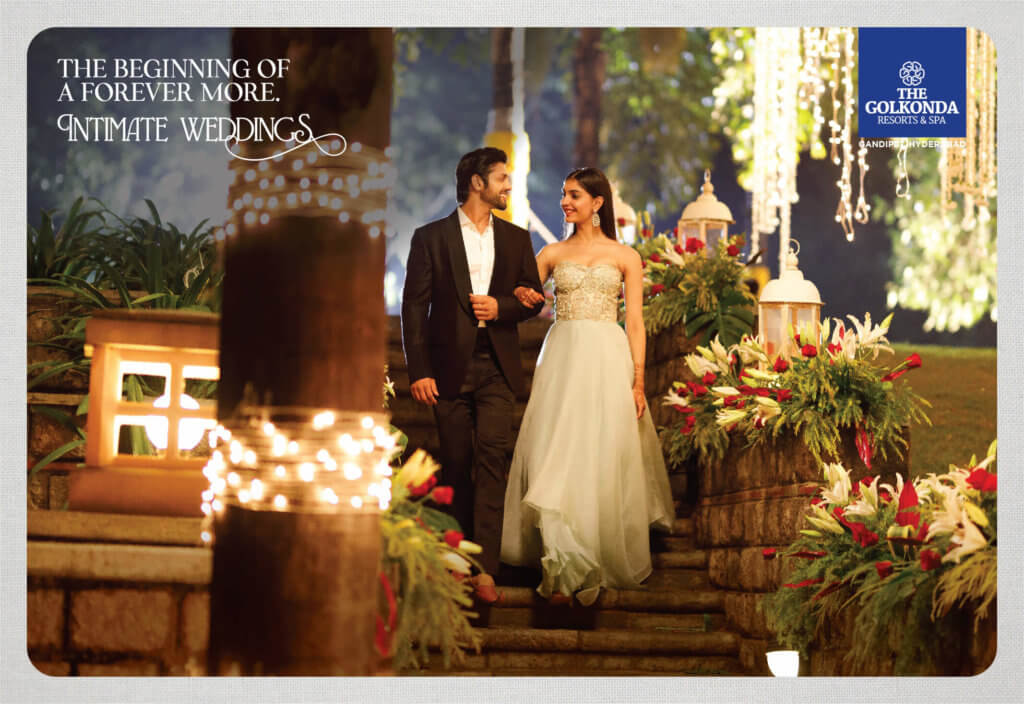 We also launched a brand campaign for the Resort called ‘Live the Feeling’ which revolved around living the feeling as you leave the world behind, and embrace the good life at The Golkonda Resorts & Spa. A space where you can enjoy quality time with the family. A space where nature and luxury blend seamlessly to create an unforgettable experience. It’s a space where you enjoy the finer things in life, and create memories that you’ll cherish for a lifetime. 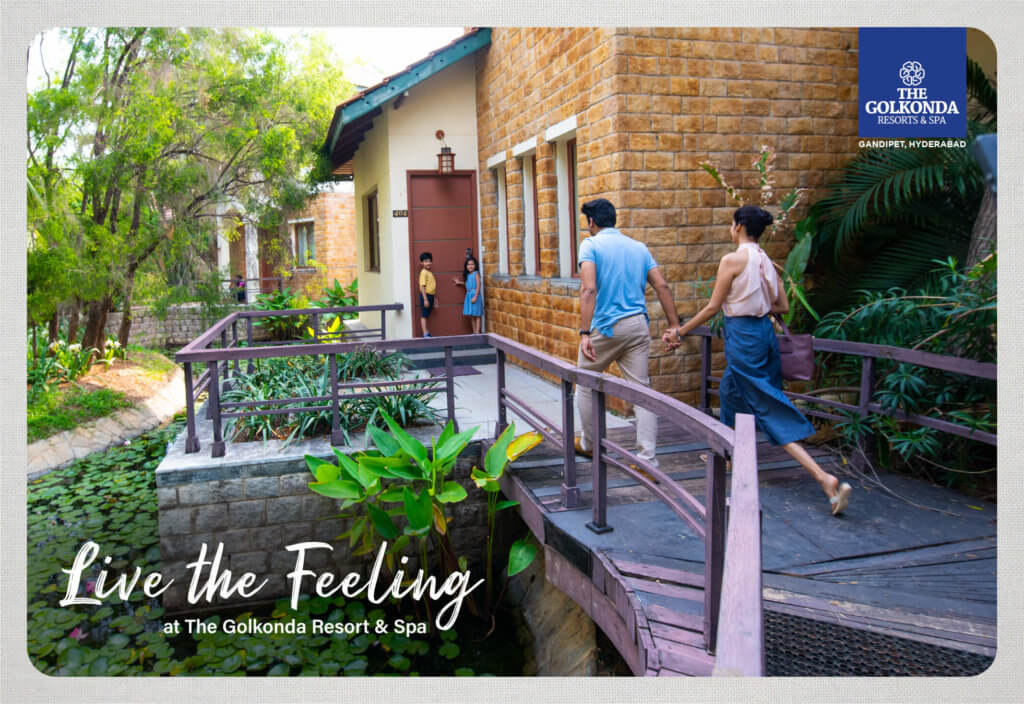 In the process, we successfully crafted a unique tone of communication for The Golkonda Group that is personal and conversational yet insightful. Every day, the brand sees a consistent growth of followers, increased impressions and reach along with engagement.

Through the ad films, hoardings, Google Display Network Ads and social media we were able to reach a large audience. This is turn resulted in a two-fold increase in the revenue and footfall of the Resort. In fact, the campaign led to The Resort’s largest billing cycle ever during the wedding season in F.Y 2018-19.